Home English Why showering in a thunderstorm can be DEADLY 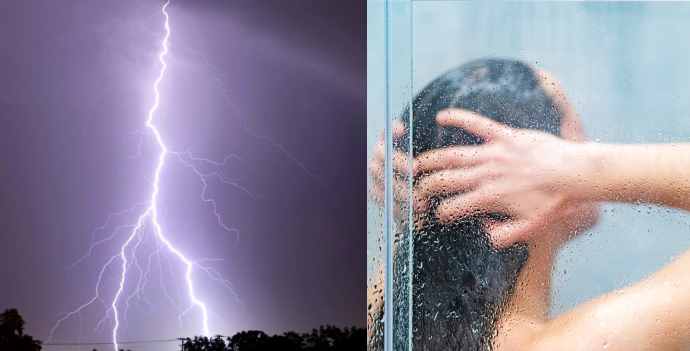 In many cases around the world there are electrocutions occurred during the hours of bad weather . In some circumstances, lightning strikes not only on beaches and outdoor locations (such as the recent fatal episode recorded in Washington near the White House ):

As also happened in Puglia – where a little boy was electrocuted while taking a shower in bad weather – the powerful electric discharge coming from the sky can travel through the pipes , affecting even those who are quietly showering in the bathroom during a rainy day . So, is taking a shower during a thunderstorm a great danger or just a series of coincidences ? Unfortunately, this activity is linked to a real increase in the risk of mortality . Here because:

Risking dying in the shower during a thunderstorm is a constant danger: this happens because lightning can travel through pipes . This means that they may hit you while you are taking a shower . All this is related to the amount of metal present in the materials used to build our homes, including the plumbing itself , which can act as a perfect conductor for electricity. While it is certainly not a given that you will be struck by lightning in the shower whenever there is a thunderstorm, this risk is not only possible but constant. In addition, water can carry electric currents . This means that lightning can travel through both pipes and water, dangerously ending its path from the shower head:

How does lightning cause injury?

There are several ways that a person can be injured by lightning. These include:

In a fraction of a millisecond, lightning can cause a huge electrical surge. If an electric current passes through your body in this way, it generates heat that can burn and destroy tissue . This can impact both the skin and internal tissues. According to the Centers for Disease Control and Prevention  (CDC). About 10 percent of people struck by lightning die, usually from a heart attack, the CDC says. You can also get serious injuries like blunt trauma, neurological syndromes, muscle injuries, eye injuries, skin injuries, and burns. However, it must be remembered that there would be no real risk of electric shock from lightning in the home until plumbing, electrical wiring or another conductive path is touched.. Already in recent years, only in the United States of America – some scholars reported – there were dozens of deaths attributed to electrocution from lightning in the home. A database of these incidents is online at  strikebylightning.org  .